Last week did little to change the technical outlook. However, short term charts are showing signs of a corrective pattern that could become an opportunity for swing traders.

The RBA maintains its easing bias. Today’s statement again noted that the inflation outlook afford would afford scope to ease policy further should that be necessary to support demand.

This week will see the release of a number of economic statistics that will give an insight into how strong demand was in February. These have the potential to influence market views on whether interest rates have bottomed.

My key takes on the daily chart are the same as last week: 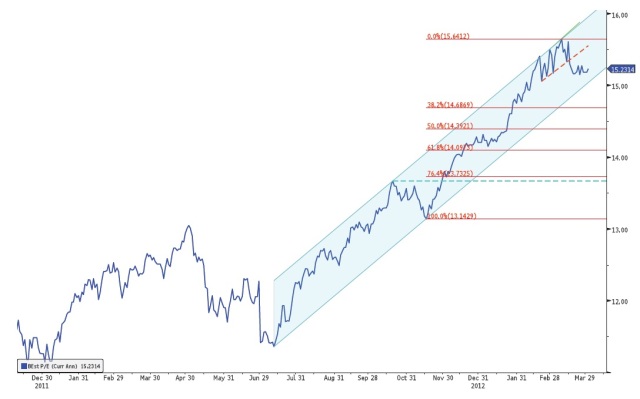 The chart above looks at the ASX 200 index as a multiple of forecast earnings for all the companies in the index. As I’ve mentioned in previous posts, this can be a useful way of comparing valuations over time and getting a handle on any significant changes in how investors are seeing the market.

Like the index chart itself, the PE chart has broken below the narrow trend channel that contained the rally since November. However, it remains within a broader channel that defines the whole move since the middle of last year. A break below that support line which currently intersects around 15.1, could indicate the start of a more serious breakdown in the renewed confidence of recent months. If this happens, I’ll post a follow up. 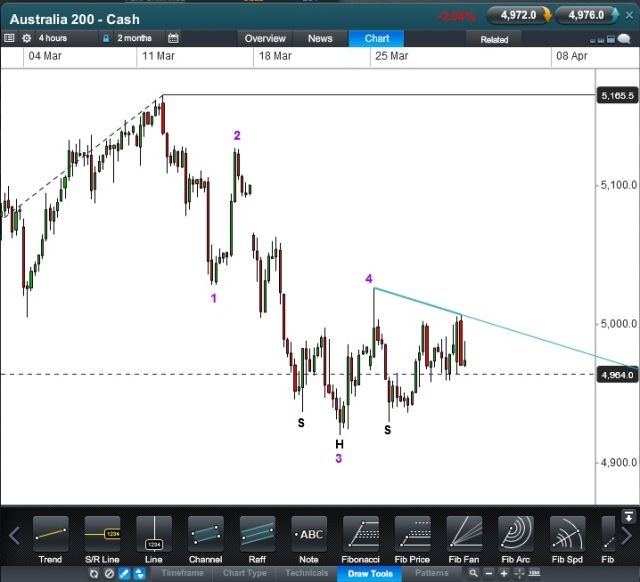 Even the 4 hour chart made no real progress last week. The most likely situation seems to me as follows:

As I’ve commented in recent weeks, one of the main reasons for the pause in the trend of rising PE values has been a growing view that Australian interest rates may have bottomed. This may have reduced the urgency to switch out of term deposits and into equities.

This week will see the release of February’s trade balance, retail sales and building approvals figures. These may help form a view on whether the economy continues to do well enough to keep the RBA on hold

The trade balance is due tomorrow. Market expectation is for a deficit of $1000m. This follows a worse than expected $1057m in January. Non rural exports fell 2.7% in January with declines across most commodities. Net exports made a significant contribution to GDP growth in the December quarter. Another weaker than expected figure in February will dampen growth expectations for the March quarter.

Retail Sales and Building Approvals are due on Thursday. Retail sales in particular could be interesting. January’s figure was up 0.9%. This confirmed stories of renewed consumer spending after Christmas and supported a rally in retail stocks.

NAB reported today that growth in its online retail sales index was quite a bit weaker in February. Year on year growth was 19% compared to 27% in January. Growth in February was the weakest in over a year. If this is reflected in the overall sales figure we may also see dampening expectations for both GDP growth and the retail sector. The market expectation is for 0.3% growth.

Recent days have seen the strong trends in Japanese markets breaking down. The Nikkei and Yen are both clearly correcting. A dissapointing result from Thursday’s BOJ meeting could add to the momentum of this correction and affect attitudes towards risk markets generally.

Friday’s US March Non Farm Payroll figure will, as always, be important. Over the last 6 months, jobs growth has averaged 186,000. Expectations are for 200,000 new jobs last month. Steady as it goes may be the best result here. Too strong could get traders worrying about the Fed withdrawing stimulus.

Efforts to form a government in Italy could be a focus. However, I suspect that the market is resigned to the likelihood of another election in the not too distant future.

Finally, it may pay to be on the alert for stories of any significant deposit withdrawals from European banks in the aftermath of the Cyprus bail in