US SPX 500 – backs off symmetrical resistance

Many technical analysts have been watching what looks as though it could be a significant resistance line in the S&P 500.

Last night the SPX rejected this line on cue. Further declines below past peaks could make this a development worth watching.

I have shown this formation on a weekly chart to get the big picture view.

Depending on your view of the overall history of this chart you might call the formation between the blue lines a rising wedge; a 3 drives pattern; an ending diagonal or all three. 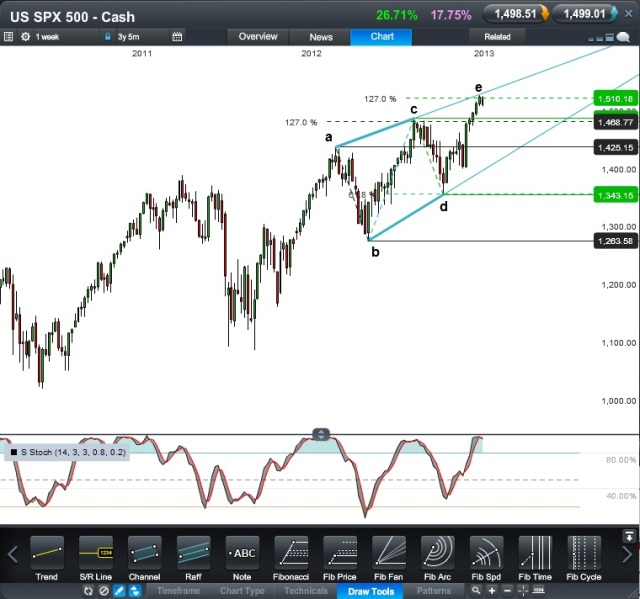 The basic chart pattern consists of 2 rising trend lines. One across resistance peaks and the other across support troughs. The support line rises faster that the resistance.

The potential for this to be a 3 drives pattern comes from the so far perfect Fibonacci symmetry displayed:

The 3 drives pattern gets its name from the 3 overlapping and choppy pushes higher that can often precede a market eventually running out of steam and beginning a significant move lower. In this case I have labelled the 3 drives a, c and e.

Looking at the daily chart, one such approach would be to sell around current levels now that price has made a minor trend peak at the trend line, placing a stop loss just behind Monday’s high. A move above that level would now suggest that price may not be making a major turning point here and so represent strategy failure.

Overlap back through previous peaks can often be a useful sign of weakness in markets. If a downtrend was to get underway from here, a move below both peaks in the pattern (dashed support line) may be an indication to big picture traders and investors of the potential for a significant decline.

If a trend does develop from here, I’ll post a follow up with thoughts on stop loss management and profit objectives.

8 Responses to US SPX 500 – backs off symmetrical resistance