AUD/JPY – Get Ready for Action

Rarely would I look at a chart in such a clear ranging pattern and try to create excitement about it. This chart is one of the rare occasions because I think for traders it has some potentially useful characteristics. One of the reasons that some people find channels dull is that they typically have quite a small range and don’t offer a fantastic risk:reward opportunity which is the thing that will just ruin a traders day. If you take a look at the chart below you can quickly see that there is no issue with that in this particular case:

You can see here how the volatility bands have crept closer together – the price has not been finding much in the way of traction lately – but this is the factor that we are very interested in because I would suggest that there is a breakout trade within a breakout trade here.

I have drawn on here what is essentially a symmetrical triangle. You can see if you look closely that the price has simply been oscillating around the 200 day moving average so that adds to the expectation that price is not really on the move – for the moment at least. The shrinking range around the long-term moving average may be suggestive of consolidation in advance of a breakout. 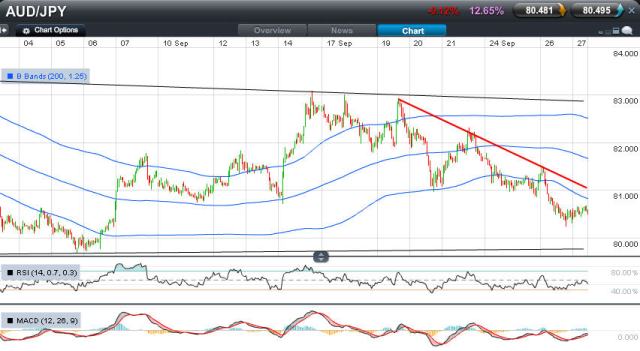 Now we get down to tin tacks. You can see on the hourly that price has been in a consistent looking downtrend for several days now and we are getting quite close to pressing on the support line. I would suggest that a break of this pattern will make for a decent short setup with a target near the major support line seen on the weekly chart. If we find support at the base of the hourly/daily support then there may be a long side trade available too but I think this is the less attractive option but that’s only due to the lesser risk:reward.

In any case put this one in your watchlist and we will see where we stand in a few days.

3 Responses to AUD/JPY – Get Ready for Action