Yesterday was a really interesting session. For much of the day we had a number of different signals that had us positioned on the short side of the local currency including double-top’s, ‘M-reversals’ and also some really neat pivot point setups which worked well for the most part. There was a real bounce though in the early part of the European session which worked against this type of setup but of course that’s part and parcel of short term trading. 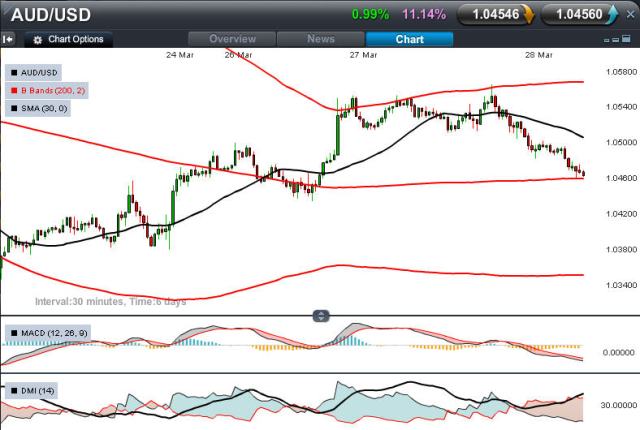 Today I think that the most interesting early setup to watch for is linked to the current testing of the 200 period moving average on the 30 minute chart. At the same time you can see that the ADX is at quite an elevated level and that the MACD is trading very consistently too. I will be watching to see if we get support around these levels for which you can look for based on the moving average and whether we get a cross of the MACD lines.

If we do see a bounce there is a pivot point at 1.0490 which will be the initial target that the very short term trader will look for but if we see a push through this level then that may present a good opportunity to move stops higher. I will revistit this setup if we see a significant push through the moving average as this will likely start to see the market take a more bearish short term outlook.

Have a good session,