Alcoa (AA US) in wide channel but resistance close

usually I would post this type of setup a bit earlier in the construction of the formation but as it turns out it doesn’t make a lot of difference in terms of price movement so it’s probably worth a bit of a look anyway.

This is one of the more heavily watched US companies around earnings season but in any case the channel that has developed in terms of price is an interesting one: 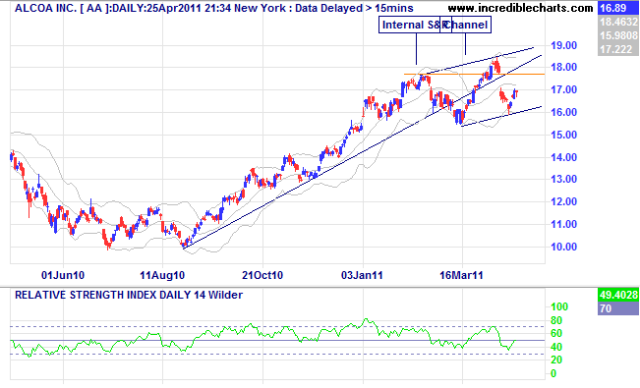 Typical technical analysis wisdom suggests that you don’t trade the inside of channels unless they are particularly wide – you probably can see that opportunity here as the price movement from the confirmation point (the most recent trough confirmation) to the top of the channel is quite significant.

The stop point that most people would use here would simply be a little below the most recent trough ($15.88). My one major concern on this chart which would limit the upside is the marked internal support and resistance level which is found at ~$17.70. If you were long and price found resistance at this level then I would be concerned for the outlook of the trade. Having said that, if this level is broken and held it would be a likely place to move your stop loss order to.

If you wind the clock back to January 2010 this was a previous resistance level then too so the $17.70 level could be very significant.